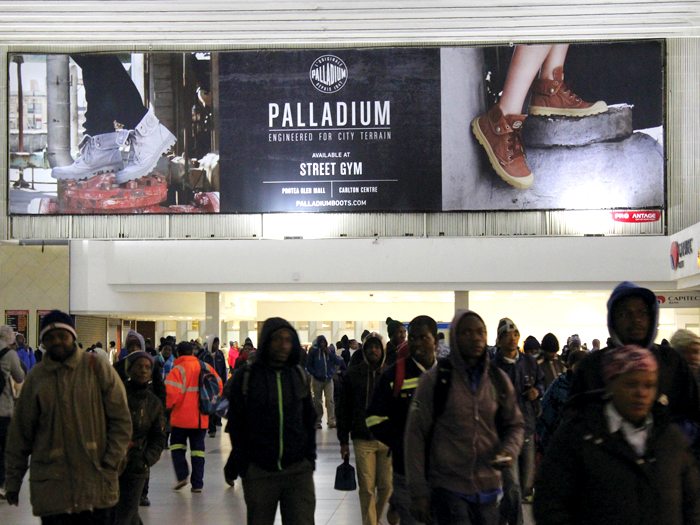 The Commuter landscape is changing. Over the past years there has been an enormous focus on the development of public transport infrastructure and Train Stations in particular. Train Stations have been revamped, upgraded and turned into attractive environments that include retail, entertainment, banking and eating. Train Stations have become a multiple layered space that offers convenience for the commuter as well as the pedestrian passing through. For advertisers wanting to reach this audience, this environment provides a golden opportunity – one that offers high frequency, high visibility, high dwell times and low wastage.

To harness the power of this environment, we’ve added Metrorail Dominance Packages to our Transit Ads™ portfolio. These packages allow advertisers to take advantage of these spaces and completely brand an entire Train Station, providing top of mind awareness in a captive, uncluttered environment.

Various Dominance Packages are available to suit budget and are made up from a selection of 152 Train Stations concentrated in metropolitan cities and towns in Western Cape, KwaZulu-Natal and Gauteng.

For brands that need to make an impact through sheer numbers and frequency, Metrorail Dominance Packages meet the objectives. Ticket sales show that an audience of 4,8 million commuters travel through Train Stations every month. On average, on arrival a commuter will linger in a Train Station for 14 minutes. On departure, they wait on the platform for an average of 32 minutes. Of these train commuters, most will travel by train five times a week and on average 21 days every month.

As the numbers clearly demonstrate, with high frequency and complete dominance, the opportunity for commuters to see and recall multiplies enormously. Recollection, assimilation and viewer reaction is also enhanced through our environment media mapping technique, which matches medium to site, ensuring that each touchpoint – be it a billboard, a digital screen or an activation – is the perfect fit for the zone and maximises the time that a commuter spends in that zone.

The Transit Ads™ Metrorail Dominance Packages allow for full ownership of stations, both nationally and regionally. Packages can also be tailor-made to suit campaign requirements.